The chart below was posted last week as part of an NPR article by Steve Henn on gender balance among coders and computer scientists. This is one of the starkest charts I’ve seen on a gender-related STEM (Science, Technology, Engineering, Maths) issue. What’s particularly jaw-dropping is that you can almost pinpoint the moment it happened and the technology that caused this profound change. 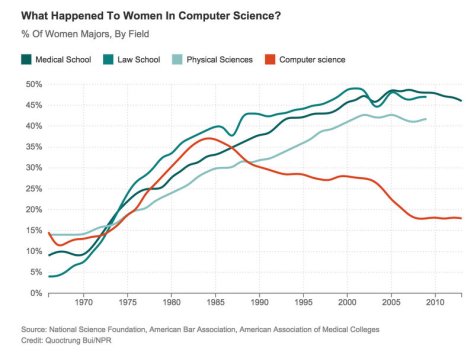 The article also highlights the distorting role of unconscious biases, and the way in which parents can unintentionally fix children on set pathways from which it is very hard to deviate as they get older.  This was discussed recently in a great BBC Horizon programme entitled Is Your Brain Male or Female?  One part of this programme focused on the ‘pink-blue’ toy debate, and showed how parents and carers unconsciously encourage children to play with ‘boy’ and ‘girl’ toys. The programme interestingly also explored whether this is entirely a nurture rather than a nature thing by getting monkeys to choose which type toys they preferred – watch the programme to see the surprising results.

Steve Henn’s article is yet other illustration of the importance of getting the message about STEM right at the earliest ages, how easy it is to unintentionally distort the message, and the impact that can result from not making the message clear.  This has been recognised for a long time, but clearly we need to ensure that clear, accurate, unbiased information about what STEM is (and isn’t) is widely disseminated.  It is therefore great to see a new attempt being made to help define one part of STEM – the role of engineers and engineering –  in a new report from the Royal Academy of Engineering. But there’s a way to go before we overcome some of our deep-seated biases, such as those beautifully summed up in this video.